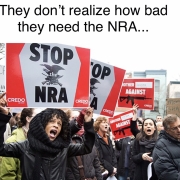 The NRA is the most well know pro-gun organization, Everytown is the largest group fighting for gun control. They are as different as night and day… or are they?

Everytown for Gun Safety was a combination of “Mayors Against Illegal Guns” (such reputable members as Mayor Kwame Kilpatrick who is currently serving time) and Moms Demand Action. Everytown is commonly referred to as Bloomberg’s gun control group as he appears to be the main one funding the organization. Other notable members include Austin Police chief who posed with Mia Kalifah as she turned in her firearm, he’s also marched with Parkland students and most recently was able to get Cody Wilson extradited from Taiwan after he fled the country (thats a topic for a different time) While the progun crown would certainly consider a group like this and others like it, such as Gabby Giffords group, to be ANTIGUN however they claim to be just for “common sense” gun control.

The NRA is the largest “progun” group boasting 5 million members and lead by Wayne LaPierre who joined the NRA in 1977 and has been in a major role since 1991. The NRA is the common whipping boy for gun control advocates, the punchline and the target for many in the antigun community. They’ve even been said to have been infiltrated by the Russian in order to help Donald Trump gain the presidency in 2016.

As we look at these two we again see two completely different organizations, but are they, are they really that different? I brought up Gabby Giffords gun control group earlier on purpose, If we were to compare her group next to Everytown you could say Giffords group is much more “progun” than Everytown. After all the Giffords themselves are gun owners. Another group we didn’t mention was the Brady Campaign… the Brady campaign chairmen Pete Shields advocated a complete ban of firearms except for military and police/security. Brady campaign of course is associated with the Brady Bill and implementation of the NICS background check and successfully lobbied for the assault weapon ban in 1993 under Bill Clinton.

As you can imagine the NRA was very upset about this bill to force background checks, as it was their idea… yes that’s correct the NRA often argues that the background check system was their brain child and if implemented the way they wanted (more in-depth checks) we would be better off. Of course that’s not it:

-The NRA assisted Roosevelt in drafting the 1934 National Firearms Act and the 1938 Gun Control Act, the first federal gun control laws. These laws placed heavy taxes and regulation requirements on firearms that were associated with crime, such as machine guns, sawed-off shotguns and silencers. Gun sellers and owners were required to register with the federal government and felons were banned from owning weapons.  “I have never believed in the general practice of carrying weapons. I do not believe in the general promiscuous toting of guns. I think it should be sharply restricted and only under licenses.” -Karl T. Frederick, the president of the NRA 1939

-1963  “We do think that any sane American, who calls himself an American, can object to placing into this bill the instrument which killed the president of the United States.” This is what spawned our current system of serialized firearms and the Federal Firearms License.

-They supposedly attempted to get some rights back in 1986 that they had previously handed over but failed. Again and again they’ve remained quiet only lobbying enough to continue to gain monetary support with the only exchange being more gun control. Even recently NRA has supported Donald Trump’s bumpstock ban and again pushed for further background checks.
Gifford is more progun than Everytown and the NRA is more progun that Gifford… but when it comes down to it what they all have in common is that they want to enact some type of gun control. They are all gun control groups. The NRA just happens to be “guncontrol lite.”

They are confusing and perhaps a more dangerous enemy as they claim to be on our side, they are knowledgeable about guns and occasionally throw us a bone. But I ask you… are they any different than any other lobbying group? In 2016 they took in $400 million dollars, what have you gotten in return? Anything in 2017 when they took in around $350 million? BILLIONS of dollars through their hands yet the most recent “wins” have come from smaller groups like Cody Wilson’s attorneys who fought for the right of 3D printed firearms and plans, or further back cases like the Heller decision which the NRA was against the case initially, afterwards the Supreme Court gave an almost correct view of the 2nd amendment, certainly a landmark case. Even now drastically smaller groups like Firearm Policy Coalition and Gun Owners of America have filed suit against Trumps bumpstock ban. Meanwhile the NRA is busy losing case after case.

The media and mainstream liberals do not understand what they have with the NRA. It is a gift to them, the NRA has been around for so long and pushed its propaganda the best, seducing gun owners and their industry partners into thinking they are the dominant progun organization. The last thing those people want is a group that is actually progun to wield the power the NRA has.

Felons should be able to buy guns and other triggering positions. PART 2