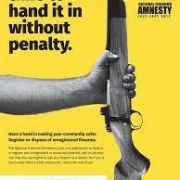 Gun control by a thousand cuts.

On the surface a lot of the most recent gun control measures that Trump mentioned do not impact me at all, I can pass any background check and I don’t want a bump stock. This is not the point though. This is what the gun control lite crowd is hollering. We should trade ABC for XYZ, or that “what’s the big deal with background checks?!?” That sounds logical if that’s all you here or that’s as far as you dive into a subject….but that’s not it.

You see the main stance of us in the anti-gun-control crowd is a few immovable positions or albeit starting points for our arguments.
1. A gun is a tool, no better no worse. The person wielding the tool is solely responsible.
-this includes features such as pistol grip, bump stock, bayonet lug, etc…
2. Background checks are pointless as they have been proven time and time again to not stop a person driven to do harm. Example: most recent Florida shooter was investigated by the FBI… still passed a check. So what good is stricter checks when this person was specifically looked at??
-if a criminal is wants a gun why would the legality stop them?
-we have guns for defense, one of those things we are defending are our rights. It negates the idea when the government can tell us who can have a gun and who can’t.
3. Magazine capacity is a joke and have been proven that even a novice can quickly change magazines.
4. Most importantly freedom and liberty are dangerous. We have rights and accept the risks.

Therefore when organizations like the NRA want to push for a feature or another style of gun to be regulated more heavily they are attacking the basis of our counter arguments, they are chopping their own legs out from under them as they open up debate for more items. Example attacking an item such as a bump stock for its ability to increase the rate of fire is an extremely slippery slope things like triggers, length of gas tubes, and weight of the bolt carrier group all effect rate of fire. Will these now be classified as dangerous? If not right now are they setting up for future restrictions? Or background checks, we’ve already seen the overreaching powers of the federal government with unlimited spying, secret FISA courts, no fly lists, etc… why would we want to add to that? Why does anyone want one more list to be added to?

Finally why aren’t we looking for the actual reasons? Why do we see a spike starting in the 1960’s of mass shootings? Many people would like to blame assault rifles but sub-machine guns used to be mail order. What was the change?… why not look at the increase in single parent homes, the increase in “latchkey kids,” or the huge increase of pharmaceuticals… Bottom line is we have had guns in basically every household since this country was settled, you can’t tell me that a device is the cause and not a change in culture or another variable that has been a part of our lives since the middle of that last century.

The Answer is MORE memes