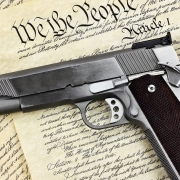 THE ATF SHOULDN’T EXIST BUT NOT WHY YOU THINK.   A number of reasons it shouldn’t exist; it’s a revenue agency who’s roots begin with the IRS and alcohol prohibition, they are regulating a constitutionally protected & natural right, and they are a federal agency that should be (as mentioned above) a state level organization at best, where local municipalities and citizens can actually effect law. It’s hard to pick an organization out besides the ATF that is so clearly unconstitutional, after all why do they even get to tax and regulate items like Alcohol and Tobacco? It’s as if the government listed sins that they deemed as appropriate to tax. The ATF’s entire history is one of tax collectors with guns. But here is the even bigger reason…

The federal government shouldn’t have this power over the states it should be a state issue. Federal gun laws should be nullified (10th amendment.) Firearms like; abortion, marriage, drugs, even free speech… are state issues. Before you get mad hear me out. I believe guns are a natural right not bound by governments, however that doesn’t mean states cannot enact laws that are against natural law (can/cannot as in posses the ability). The constitution and bill of rights apply to the federal government, the powers that they have NOT the powers the individual states have. This line of thinking is probably counter to what 99% of gun owners believe today and even though I’ve talked about felons and drug use, this may be the most shocking and hard position to get behind. It’s even hard for me as I’ve taken the position for so long that the 2nd Amendment was king when it came to gun rights legislation, our gun rights ebook even takes that position, after all this is what we’ve all been told over and over. What always bothered me however was that if you got into an argument with the right person they would bring up gun control laws that were going on at the same time as the second amendment. This used to drive me nuts… “why did they have gun laws so close to the second amendment,” answer is that these were state laws that had nothing to do with federal laws. Another example is the first amendment, besides free speech, what is the first amendment? Separation of church and state, yet three states at the time had state churches. It would also seem unnecessary for states to proclaim the same rights that are listed in the bill of rights in their own constitution. Example the Michigan Constitution states “ Every person has a right to bear arms for the defense of himself and the state.” What was the point of saying this if the 2nd amendment had already covered it?

To be honest I don’t remember what sent me off on this tangent of why the 2nd doesn’t apply to the states, whatever I was reading or listening to  had nothing to do with gun rights. The further problem is that this is such a unique subject I had no idea where to look for more information.  Luckily months later I was listening to the Mises Weekend podcast with Jeff Deist whose guest was Michael Boldin from the Tenth Amendment Center. Jeff Deist mentioned in passing Brion McClanahan’s position is that the states aren’t bound by the second amendment. If you don’t know the three men I just mentioned you should, they are some serious liberty pushers all who produce great work. For this topic I think the best thing to do is to point you to Brion and have him explain it. Two of the links are to rebuttals from someone arguing with him, this to me is helpful because he’s answering tough questions posed by an opposing view. The first is a link to a 30 minute podcast he did on the subject.   https://blog.tenthamendmentcenter.com/2016/07/brion-mcclanahan-on-the-original-meaning-and-purpose-of-the-2nd-amendment/https://www.brionmcclanahan.com/blog/my-response-to-chris-woodard-at-freelibertywriters-com/https://www.brionmcclanahan.com/blog/my-response-to-mr-woodard-part-ii/

In many ways we’ve drifted so far from original intent we begin to argue positions incorrectly, now we’ve argued them so long and even lawmakers have formulated unconstitutional laws for so long that they couldn’t even tell you. The proof is that gun owners have won some cases on the federal level for state laws. The issue is two serparate issues 1. The federal government needs to get out of the firearm business altogether and 2. Gun owners need to stand up to their own states, whether that be voting, using the courts, or in massive displays of civil disobedience. Gun owners for too long have relied on organizations and other people to fight for them, example would be the NRA… 5 million members yet over 80 million gun owners. That means even if the NRA was progun they would only be getting supported by 6% of gun owners. Organizations like this have let numerous laws slip through, even when they were lobbying more heavily the Hughes amendment, Brady bill, the assault weapon ban, etc all passed.

Bottom line the ATF shouldn’t exist because of the preamble of the Bill of Rights. It’s interesting that the preamble to the constitution is widely read but the Bill of Rights preamble is not. “THE Conventions of a number of the States having at the time of their adopting the Constitution, expressed a desire, in order to prevent misconstruction or abuse of its powers, that further declaratory and restrictive clauses should be added:” better explained by Brion McClanahan “The 2nd Amendment to the Constitution was never intended to apply to the States. The original preamble to the Bill of Rights states unequivocally that the Bill of Rights are “restrictive clauses” to prevent the “misconstruction or abuse of its [the Constitution’s] powers” and are applicable to the federal government as in “Congress shall make no law.” If congress shall make no law then how did they create a whole organization to enforce laws they can’t make? This is the heart of gun control, the states must nullify unjust laws.

Some takeaways from this should be that state gun control laws should be fought at local level, the federal government needs to stop being treated as the overseeing parent. Second the federal government has overstepped its bounds immensely, reading the original drafters and more importantly the ratifiers you will see how our current system is in no way operating as intended.

Want more difficult scenarios to deal with, then read this. The PDF and Audio book are free.  Walter Block “Defending the Undefendable” https://mises.org/library/defending-undefendable

More like this? Then read Murray Rothbard’s “The Ethics or Liberty” I suggest reading chapter 23 multiple times.  https://mises.org/library/ethics-liberty