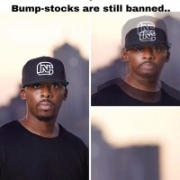 For years I appreciated your videos, the interesting narrative was unlike what others were posting. It was entertaining, it was showing high end guns and a few others. Also your defense of gun rights was on point and solid. All this is why it was so stunning your alignment with the NRA on their proposal to investigate bump stocks. I can’t quite pinpoint it, not sure if it is just blind loyalty or if you felt pressure after taking an opposing view after Philando Castile (where the NRA dropped the ball again).

What I want to do is go through that statement so we all can review the NRA’s position. There are a lot of items that are bullshit but let’s focus on the major flaws. These statements are taken in context from NRA’s official website: “National Rifle Association is calling on the Bureau of Alcohol, Tobacco, Firearms and Explosives (BATFE) to immediately review whether these devices comply with federal law.” None of us want the ATF to further investigate or make judgements, they are not a legislative branch. The idea that the NRA is playing this elaborate game of chess to put the ball in the ATF’s court and leave congress out of it is foolish, name one time the NRA has negotiated an item so we could get something better. The NRA is supposed to be a gun rights organization… not a “the gun rights that most people care about” organization.

Next. “The NRA believes that devices designed to allow semi-automatic rifles to function like fully-automatic rifles should be subject to additional regulations.” That’s enough to tell the NRA to screw themselves. Us gun owners have been wanting an end to NFA and we thought (well some people did) that Trump was a pro-gun President that we could get to do it. There is another part to this… many die hard NRA supporters said they are putting the ball in the ATF’s court because they already made a ruling on it twice and wouldn’t change their minds, however the next sentence says the “NRA believes items such as that SHOULD BE subject to more regulations.” It’s clear as day.

The remaining gibberish is just filler to act like we can trade bump stocks for national reciprocity. What they are clearly doing is compromise, you made a great video on the failure of compromising… yet this is exactly what they are doing and what you said in defense of the NRA, that you would rather have national reciprocity over bumpstocks. Choosing one over the other is compromising. We are no closer to national reciprocity, no closer to national hearing act. BUT what we do have now is the NRA backed president pushing a ban on bump stocks as well as stricter background checks. I know you don’t agree with Trump on this because you tweeted during debates about the ignorance of no fly list and random pat downs. This isn’t a slippery slope… this is a huge invitation to look at competition triggers, binary triggers, and numerous other parts, hell the weight of BCG can change rate of fire!

This is what my plea is… on a recent post you said you are just one man against thousands of “antis.” I can’t tell if that’s ego or ignorance. You have thousands of followers on multiple platforms, I would bet you have the most followers of any pro-gun person. Perhaps some gun guys may have more but they are not vocal about pro gun issues or they don’t have the opportunities that you have to talk to people outside of a gun blog or social media.

You’re right we do need to stand together, we will continue to lose rights until this happens. You at one time even warned that anti gunners would parade “pro gun” individuals who are calling for gun control as examples of how everyone wants gun control. Well until the NRA is on board they will lose followers left and right as we all move to an actual pro-gun organization the Gun Owners of America. The NRA and these pop up gun companies that came up under Obama who are still looking to capitalize on panic buying aren’t winning support of the new pro-gun community.

Start backing the rest of us and stop making excuses for this archaic organization.

*UPDATE: This was originally posted in Feb of 2018, so this still seems like an appropriate response due to your recent response where you only regurgitated the same talking points and posted a podcast from a year ago that was just as inaccurate then as it is now… only difference being that we now see the result, that we were correct.

Gun control by a thousand cuts.

On the surface a lot of the most recent gun control measures that Trump mentioned do not impact me at all, I can pass any background check and I don’t want a bump stock. This is not the point though. This is what the gun control lite crowd is hollering. We should trade ABC for XYZ, or that “what’s the big deal with background checks?!?” That sounds logical if that’s all you here or that’s as far as you dive into a subject….but that’s not it.

You see the main stance of us in the anti-gun-control crowd is a few immovable positions or albeit starting points for our arguments.
1. A gun is a tool, no better no worse. The person wielding the tool is solely responsible.
-this includes features such as pistol grip, bump stock, bayonet lug, etc…
2. Background checks are pointless as they have been proven time and time again to not stop a person driven to do harm. Example: most recent Florida shooter was investigated by the FBI… still passed a check. So what good is stricter checks when this person was specifically looked at??
-if a criminal is wants a gun why would the legality stop them?
-we have guns for defense, one of those things we are defending are our rights. It negates the idea when the government can tell us who can have a gun and who can’t.
3. Magazine capacity is a joke and have been proven that even a novice can quickly change magazines.
4. Most importantly freedom and liberty are dangerous. We have rights and accept the risks.

Therefore when organizations like the NRA want to push for a feature or another style of gun to be regulated more heavily they are attacking the basis of our counter arguments, they are chopping their own legs out from under them as they open up debate for more items. Example attacking an item such as a bump stock for its ability to increase the rate of fire is an extremely slippery slope things like triggers, length of gas tubes, and weight of the bolt carrier group all effect rate of fire. Will these now be classified as dangerous? If not right now are they setting up for future restrictions? Or background checks, we’ve already seen the overreaching powers of the federal government with unlimited spying, secret FISA courts, no fly lists, etc… why would we want to add to that? Why does anyone want one more list to be added to?

Finally why aren’t we looking for the actual reasons? Why do we see a spike starting in the 1960’s of mass shootings? Many people would like to blame assault rifles but sub-machine guns used to be mail order. What was the change?… why not look at the increase in single parent homes, the increase in “latchkey kids,” or the huge increase of pharmaceuticals… Bottom line is we have had guns in basically every household since this country was settled, you can’t tell me that a device is the cause and not a change in culture or another variable that has been a part of our lives since the middle of that last century.