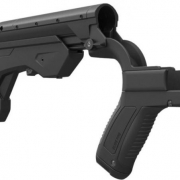 Numerous news agencies are reporting that any day Trump will be finishing up a ban on bump stocks which many say would include a mandatory turn in. This has been a long coming proposal ever since the Las Vegas shooter supposedly used this device. 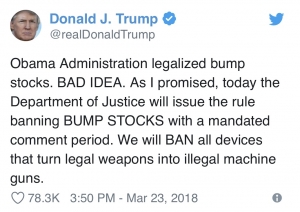 For those of you who don’t know bump stocks (slide fire/ bump fire) is an interesting product that allowed for a faster rate of semi-automatic fire while still only producing one shot per trigger pull thus leading to a ruling by the ATF that bump stocks were not subject to NFA regulations (more on that later). Some claim that bump stocks can attain rates up to 800 rounds per minute, which any one in the gun world will tell you that this is a sensationalized claim. The Vegas gunman took about 10 minutes to fire 1,100 rounds, a lot of rounds but no more than could be fired without the addition of a bump stock.
More on Vegas since this is where the issue began, the tragic events of that day left 58 dead and 489 wounded. It is an incredible amount and if you add those numbers to the other times bump stocks were used since 2010, you would come up with a total of 58 dead and 489 wounded… Yep, as tragic as that event was, the bump stock is not commonly used. To compare let’s look at the 248 lives that have been lost since 2010 due to furniture mishaps, falling coconuts causing 150 deaths annually, high school football resulting in 12 deaths every year (96 deaths since 2010)… cows, bees, hot water, falling icicles, auto-erotic asphyxiation all result in more deaths than the bump stock. So why go after bump stocks?
No doubt the argument that is pushed by organizations such as the NRA is that “the bump-stock is a useless accessory that can easily be the sacrificial lamb, the goal of gun owners is National Reciprocity” (this is the right of gun owners to carry concealed no matter what state they are in). However history shows this will not work and incidents like this are why the NRA is losing members and money. You see gun control history has not been pleasant to the gun owner over the last century, not only in its restrictions but in its constant reinterpretations. Example: the 1934 National Firearms Act (NFA) was pushed as a revenue generating tool and not a prohibitive one, therefore not infringing on our rights. This act made gun owners pay the hefty tax of $200 for a shotgun less than 18 inches. As a frame of reference a shotgun cost a mere $6. A few years later a case made it to the supreme court, Miller V. United States. The case was regarding a 16 inch barrel shotgun and at that time Justice McReynolds ruled a 16 inch barrel shotgun had no MILITARY purpose therefore was not protected by the 2nd Amendment. Fast forward to the Gun Control Act (GCA) of 1968 where it was ruled a firearm must have a SPORTING purpose. This of course isn’t the end of the violations but I did it to express the point that the government words things how they want to, when they want to, in order to get the results they want.
This same line of government meddling will be used with the bump-stock ban and this is where the NRA hurt itself tremendously after the Vegas shooting. One they blamed Obama which is laughable, imagine an organization that said Obama was going to take your guns now saying Obama was too lenient then the guy they endorsed is actually going to pass gun control legislation in the form of bump-stock ban (and further background checks). Second was their wording in their statement after the Vegas shooting.
“The NRA believes that devices designed to allow semi-automatic rifles to function like full-automatic rifles should be subject to additional regulations.”
Countless people in the gun community saw a pro gun NRA endorsed president as a way to finally repeal the 1934 NFA and the 1986 Hughes amendment, or at least past the Hearing Protection Act which would remove suppressors/silencers from the NFA. But the NRA’s statement clearly shows they believe that these items need more regulations. Furthermore the issue becomes that of blaming a device. For years the NRA and their talking heads have said accessories such as pistol grips, magazine capacity, collapsible stocks, etc do not play a role in the deadliness of a firearm, and more so that the dangerous part isn’t the firearm at all, as it is only an object or tool. Blaming bump-stocks turns this argument on its head.
What’s more is some states have pushed legislation with proposed language referring to an increase in cyclic rate. Who gets to distinguish what is an increase in cyclic rate? It’s like asking what is a “livable wage.” Triggers can increase the cyclic rate by having a shorter reset, the reset is the minimum length a trigger must return before another pull can take place. Gas tubes can effect cyclic rate, muzzle devices, buffer systems, and on and on, even gun oil could have some effect.
Politicians have this nasty habit of continuing down futile paths and promising results only to head further down and continue to attempt to legislate a result. Just look at the spending on the war on drugs, education, and the war on terrorism. let us not forget to look back and realize bump stocks were invented specifically because of bad legislation, not to mention you can bump fire a gun without the stock. Ultimately banning bump-stocks will not save school children or prevent another Las Vegas, they won’t be exchanged for national reciprocity or any positive for gun owners, they will simply be the next legislative placebo used to chip away at our rights and be one more stepping stone for further bans.
https://home.nra.org/joint-statement
December 6, 2018/0 Comments/by josh moa
https://www.wearemoa.com/wp-content/uploads/2018/12/F031FBB6-FE31-4A13-A656-4DCF53F1B359-660x452.jpeg 452 660 josh moa https://www.wearemoa.com/wp-content/uploads/2018/08/MAING-HEADER-300x138.png josh moa2018-12-06 19:49:592018-12-29 21:12:56Bump Stocks
0 replies

Gun Control by a Thousand Cuts