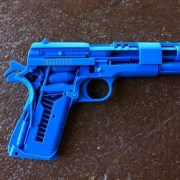 *I originally submitted this as a reply to the question about 3D firearms*
While it’s a highly controversial subject in the news it’s not even a remotely difficult one from the standpoint of freedom. At the heart of the matter is freedom of speech which has already been won by Cody Wilson the founder of Defense Distributed.
Freedom of speech which includes information is not protected so we can talk about just agreeable topics. What has muddied these waters is that people believe emotions and feelings dictate law in this country, but this isn’t the case, not even if the majority of the people feel a certain way.
While Donald Trump is known for his inconsistency so this is nothing new when he attacks 3D printed firearms, this mirrors his idea for shutting down what he claims as fake news. Even beyond Donald Trump both sides of aisle have issues with information when it is something you disagree with look no further than a person like Julian Assange, when Assange leaked information from Chelsea Manning the left applauded and right was furious. With the Wikileaks of Hillary’s emails whether they come from Seth Rich, Russian hackers or whoever else, the left was furious and the right applauded.
Also of note is that 3D printed guns are still in their infant stage. Costs of the 3D printer and materials needed to make a gun fire (more than once) or even reliably is astronomical. This is equivalent of saying that CAD files are available so everyone can machine a firearm. A CNC capable of making a reliable firearm along with the materials to make a firearm could probably be procured for less than a adequate 3D printer. But these CAD files are all available and have been available for decades, yet you can’t name an instance where this has been or problem or even happened.
In regards to the NRA stance which Donald Trump has said to have conferred with, what mainstream doesn’t seem to get is that the NRA makes up less than 4% of gun owners in the US, to put that in different terms, they don’t represent the majority of gun owners. The NRA represents manufacturers and large retailers who are their largest donors. Accessible firearms such as 80% and the idea of 3D printed firearms are products that take away from their bottom line.
Again plans for firearms are information that is already out there, people who think this presents a new danger have no clue how firearms work, or how easily one can be built from $20 of parts and Home Depot (not an exaggeration). Fact of the matter is information is not illegal, what someone does with that information could be but precrime is a dangerous and slippery slope.
Click here to see how accessible
https://www.dropbox.com/sh/ljldgaiqa74tj6x/AADOmGslJXD586tZO7a5EhLDa?dl=0
August 30, 2018
https://www.wearemoa.com/wp-content/uploads/2018/08/4grxyipjecfy.jpg 765 1024 Josh Ramey https://www.wearemoa.com/wp-content/uploads/2018/08/MAING-HEADER-300x138.png Josh Ramey2018-08-30 13:31:142018-12-29 21:13:503D Printed Freedom

Because these cookies are strictly necessary to deliver the website, refusing them will have impact how our site functions. You always can block or delete cookies by changing your browser settings and force blocking all cookies on this website. But this will always prompt you to accept/refuse cookies when revisiting our site.